Stanley Market > Getting There > GMB 40 from CWB

Green MiniBus are not as comfortable as taxi or even bus, but they do run as frequently or more so than busses, and are a lot cheaper than taxis. These 16 seater small vans are regulated public transport, take octopus or cash, but tend to drive rather fast around the winding roads. You can flag one down at any point on their route, and also ask to get off at any point making them more flexible than a franchised bus.

Despite the name the minibuses are only green around their top, the rest of the body of the bus is usually covered with advertising.  The busses have a name plate at the top front stating their destination in Chinese and English, though the English may be in a small font and harder to read. A bus number is always displayed but not always obviously, while the driver may also put a "full" notice in the front window if the bus is full. 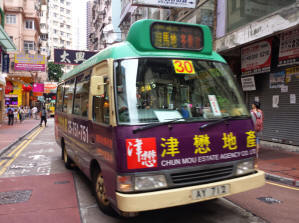 Flag down the bus you want, in this case it should be the number 40 with a name plate saying Stanley Market or Stanley Prison, don't worry you can get off before the prison!

In Causeway Bay you should stand on Hennessy Road watching traffic that is going west, towards Wanchai, and look out for the right minibus.

When you board the minibus pas the $10 fee immediately and then wait as it goes via Wan Chai, the Aberdeen tunnel, Wong Chuk Hang, Deep Water Bay, Repulse Bay then Chung Hom Kok before finally reaching Stanley.

The bus stops outside Stanley Plaza first before going onwards to Stanley Market. If you miss that stop it will go on to the Stanley Prison, then return to the market so you have a second chance to alight. The bus runs continuously all day but frequency variies according to how busy it is, from 15 mintues to 3 minutes.