Stanley Market › Getting there › From Wan Chai

To Stanley Market from Wan Chai

One of the more famous districts of Hong Kong Island is that of Wan Chai, or Wanchai (灣仔), which has quite a history and a reputation, to which it doesn't really live up in modern times. But it is nevertheless and interesting part of Hong Kong, and has a range of hotels, restaurants and bars.

Today people visit the district for the dining, because their hotel is there, or for some of the historic sights. There are several historic buildings from the golden age of the 1920s, including The Blue House and The Pawn restaurant housed in a traditional pawn shop building.

Although there is not much to see there many visitors to Hong Kong come to the Golden Bauhinia Square, outside the HK Exhibition and Convention Centre, where this giant golden statue of Hong Kong's flower.  Great views of the harbour, and of the Convention Centre itself, make up for the lackluster appearance of the square and the statue itself.

Take some time to visit the Old Wan Chai Post Office, now an environmental resource centre, but more interesting perhaps as an example of British Colonial era Royal Mail post office. Nearby the tiny Hung Shing Temple is a classic example of a small village Taoist temple, right in the modern city centre.

Shopping in Wanchai includes big name chain shops, the 298 Computer Mall, and street markets such as that at Tai Yuen Street Market, home to unique toy stalls, or for budget historic souvenirs along Wanchai Road.

Geographically Wan Chai is close to Stanley, but on the other side of the hill. Travelling from one to the other involves either going over the hill, or via the Aberdeen Tunnel. Which way you go depends on your preference for views vs speed, as of course the tunnel is faster but you don't see as much of the countryside.

So getting to Stanley Market from Wanchai involves some form of road transport, unfortunately the otherwise excellent underground railway system (MTR) doesn't extend as far as Stanley.  Therefore the best options are Taxi, Bus or green minibus.

Today's visitors are most likely going to the beach to swim or sunbath, or perhaps visit the kitsch Kwun Yam Shrine which sits incongruously at the end of the sandy beach. With its 1970s style tile mosaic and quasi-traditional Chinese Longevity Bridge it is also a working Taoist Temple dedicated to Kwun Yum and Tin Hau. 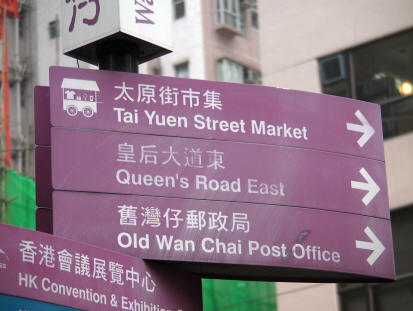 The beach itself is artificially extended and much of the sand there is not originally beach sand, but dredged from elsewhere. Hence parts of it tend to be course compared to some other beaches in Hong Kong, but that doesn't stop it being a popular swimming spot. And families with small children appreciate the shaded areas from the many trees which grow in the sand, as well as the good clean public facilities at the beach such as the Fast food kiosk, Changing room, shower facilities, toilet, raft, playground and beach volleyball court.  Lifeguard services run from the first of March through to the end of November.

Although quite close to Stanley market, both being in the Southern District, there are limited transport options between Wan Chai and Stanley. Busses are your best bet here as they are very frequent and run at all times of the day, while the usual Hong Kong go-to of a Taxi is much more hit-and-miss.  Walking along the coast is also a possibility, as is hiking up the hill and down again, but only during suitable weather. 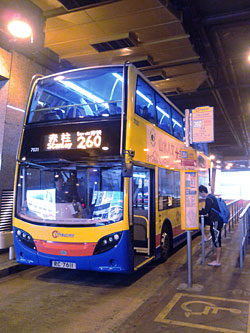 Several bus routes go through Wan Chai on their way to the Stanley peninsula and catching them on Gloucester Road, or Amoy Street in Wanchai is easy. 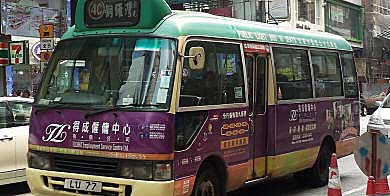 The route 40 GMB goes from Causeway Bay which is right next to Wanchai.  Particularly if you are in the eastern part of Wanchai then you are actually right next to the path of the minibus.

Unlike other buses you can flag down a minibus anywhere on the street, but it is best to get them at a station if you can. The 40 bus goes along Canal Road East, undre the overpass, right behind Times Square.

As this is near the beginning of the route there are often seats available, while later the bus tends to fill up as there are only 16 seats in each bus.

At HK$10.80 it is approximately the same price, and probably quite a bit faster. There are no discounts for children, but those people with the senior citizen Octopus cards are entitled to discounts. On the down side some people find the rather enthusiastic driving of the GMB captains to be a little much for their tastes.

For more about the #40 GMB read here.

There are always plenty of Taxis in Hong Kong, and that is particularly true of Wan Chai. The iconic red taxi cab is now seen in a wider range of shapes than the old Toyota salon, and you'll find hybrid, minivan and other options. With all the drivers being Hong Kong residents they will have no trouble navigating the otherwise confusing streets of Wanchai, and taking you to Stanley.

Try getting one from one of the side streets that connect Hennessy, Lockhart and Jaffe Roads.  Be specific when you tell the driver you want to go to Stanley market about whether you want the Aberdeen Tunnel Route, which is more direct, or to go over the hill via Stubbs Road and Wong Nai Chung Gap for more scenery

Your own private driver in a limo is of course a great way to go, so if you haven't tried Uber in Hong Kong yet then this is a great chance to do so.  While taxi drivers may not love them, there is a growing base of fans of the service.  More expensive than Taxis but offering a more luxurious service, you can easily find a Uber available in Wan Chai.

As they don't tend to venture out of the city center so often though you'll probably not find one to take you on the return trip unless you organise with a drive in advance.

Use my invite code, cgltj, and get a free ride up to HK$100. Redeem it at https://www.uber.com/invite/cgltj